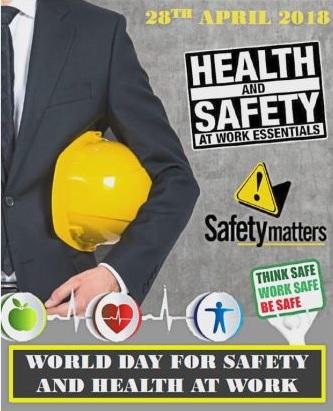 On this day every year, government, employers and workers’ organisations worldwide are encouraged to conduct awareness-raising activities within their areas of influence to reduce accidents and ill-health at the workplace.

It started in 1996 when trade unions worldwide observed April 28 as a date to commemorate dead and injured workers. In 2003, the International Labour Organisation (ILO) became involved in the campaign upon the request of trade unions and has since then capitalised on its traditional strengths of tripartism and social dialogue to help promote this special day.

World OSH Day is also an annual event to increase awareness about how to make work safe and healthy as well as to raise the profile of OSH in the respective countries.

This year, ILO has also decided to have a joint campaign for the World OSH Day with the World Day Against Child Labour (WDACL) to help improve the safety and health of young workers and end child labour.

Themed “Generation Safe & Healthy”, this year’s commemoration is in line with ILO’s aim to secure safe working environments for all workers by 2030 and end all forms of child labour by 2025.

According to ILO, some 541 million young workers aged between 15 and 24 years old account for more than 15% of the world’s labour force and suffer up to a 40% higher rate of non-fatal occupational injuries than adult workers. These young workers include 37 million children working in hazardous conditions.

We must also highlight the risks facing young workers in Malaysia and address these challenges by improving the safety and health aspect for them.

Under the Children and Young Persons (Employment) (Amend­ment) Act 2010, the definition of a “child” is a person below 16 years old while a “young person” is a person who is aged between 16 and 18 years old.

Under the amended Act, children and young people should not engage in any hazardous work and should not be allowed to be engaged in employment contrary to the Factories and Machinery Act 1967, the Occupational Safety and Health Act 1994 or the Electricity Supply Act 1990 or in any employment requiring them to work underground.

Since they are new to the workplace, most of these young workers lack knowledge, experience and maturity. Many of them may not be aware of the risks they face at the workplace.

Other factors that may put young workers at greater risk include insufficient skills and training, lack of awareness of their rights and their employer’s duties, not having the confidence to speak out and employers not recognising the additional protection that young workers need.

It is the employer’s responsibility to protect the safety and health of workers and they should pay particular attention to young workers. They must carry out a risk assessment exercise before a young person starts work and put in place measures to protect them.

Under the Occupational Safety and Health Act (OSHA) 1994, it is the responsibility of both employers and their workers to ensure safety and health at the workplace and those who fail to do so could be charged in court.

Employers and contractors who fail to provide a safe and healthy working environment for their employees can be charged under Section 15 of OSHA 1994, which carries a maximum sentence of a RM50,000 fine, or two years’ jail, or both.

Young workers must also be given work appropriate to their age and provided with adequate training and supervision.

One of the main problems facing the industrial sector in Malaysia, especially the manufacturing and services industries, is the over reliance on foreign workers. As a result, the training and development of young employees have been neglected.

Young workers must undergo professional training such as those offered by the National Institute of Occupational Safety and Health (NIOSH) and apprenticeship programme that could help improve their knowledge and skills.

It would eventually help reduce work-related accidents and illnesses, which could become an economic burden on workers and their families as well as on enterprises and on society as a whole.

There is clear evidence that a healthy workforce can enhance business productivity, benefit enterprises and national economies by reducing the number of accidents and diseases and lowering the number of insurance and compensation claims.

I believe our people should also be exposed to a good safety and health culture at a young age, and this is one of the main reasons why NIOSH has brought the OSH culture to school.

Under its “OSH in School” programme, for example, NIOSH aims to educate and create OSH awareness among students, who could then act as the eyes and ears of the school management in hazard identification, risk assessment and risk control (HIRARC).

With adequate OSH knowledge and awareness, students who leave school will have practical safety knowledge that they can take with them when they join the workforce.

Malaysia is among a few countries in the world that has introduced OSH in schools and I am confident the efforts to promote good OSH culture at a young age could help create a safe and healthy generation.

Ultimately, when OSH is integrated into the community, it will become a core value and contribute towards the achievement of an OSH culture at all workplaces.