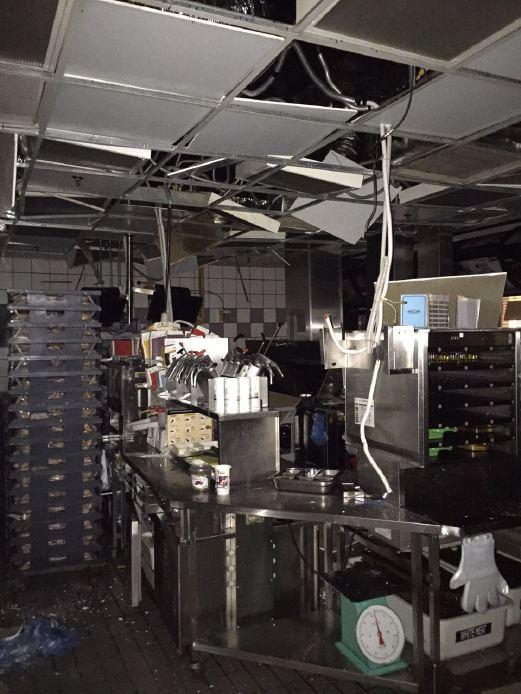 The ceiling of a restaurant which was damaged due the blast.Pix courtesy of Fire and Rescue Dept.

KUALA LUMPUR: An explosion rocked the Mid Valley Megamall shopping centre this morning, believed to be triggered by gas cylinders.

Eight people were believed to have sustained minor injuries in the incident.

The explosion reportedly caused part of the ceiling of the Chili’s and McDonald’s restaurants to collapse.

Five people including two women were injured at Chili's when the ceiling collapsed in the kitchen and in front of the restaurant located at the ground floor.

Three men were injured at McDonald's, located at the lower ground floor, when the ceiling collapsed in the kitchen area.

Of the eight injured, three sustained burn injuries while the others sustained light injuries.

Those injured have been sent to the hospital by members of the public.

"The witnesses claimed that maintenance was being carried out prior to the incident. The fire investigation unit and Hazardous Material Team (Hazmat) were deployed to ascertain the cause of incident,said Azizan.

Meanwhile, in a statement, Mid Valley Megamall management confirmed that the incident took place at approximately 9.45am.

During re-instatement work to our liquefied petroleum gas (LPG) system after maintenance works, we experienced minor explosions at two food and beverage outlets.

There were minor injuries to our maintenance staff, LPG contractor and tenant staff. Medical treatment is already being given. There were no fatalities, neither were there any injuries to the public.

“We are working with the relevant authorities and have shut all the gas systems in Mid Valley Megamall until further notice.

“The mall will remain open to visitors,” said the management, adding that safety remains its utmost priority.